Oxytocin, Contagion of Positive Emotions and Performing in Team-Sports

Emotional contagion refers to the tendency to automatically mimic and synchronize expressions, vocalisations, postures and movements with those of another person’s and consequently to converge emotionally. Contagion of positive emotions is thought to play an important role in achieving successful sport performance. Emotions can be converged  during positive social interactions, such as the celebration of a goal. Little is known about the bio-behavioural underpinnings of emotional contagion. In this poster we hypothesized that oxytocin plays an important role in this  phenomenon.

By GJ Pepping and E Timmermans

Conclusion and Discussion
There is support for a role of oxytocin in enhancing sport performance through the contagion of positive emotions. Taken together, oxytocin and emotional contagion of positive emotions encourage important processes in sport, which have been linked to greater team performance. More insight in the bio-behavioural underpinnings of socio-emotional processes, such as emotional contagion, has importance for sport psychological and sport science support, talent identification, coaching, training, team selection, and team development. 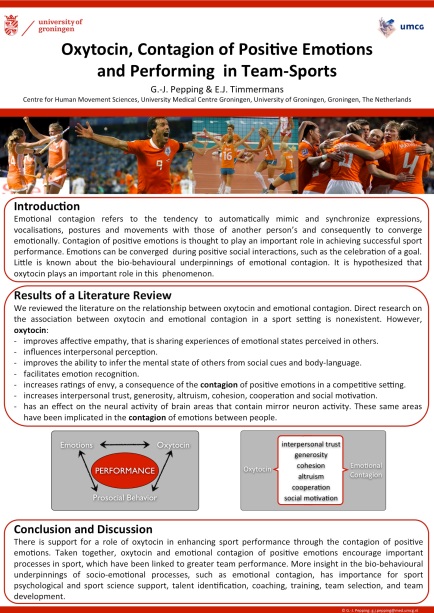 3 comments on “Oxytocin, Contagion of Positive Emotions and Performing in Team-Sports”