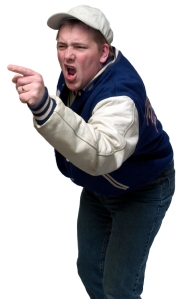 Imagine you’re coaching a big football game, against an undefeated team that has beaten your team in all your previous matches. Your 11-year-olds are playing well and are ahead. Then, in the closing minutes, the official makes a bad call that goes against you and, because of it, you lose. After the game, the parents of your players scream at the official. The kids are disappointed, looking up at you. What do you do? [for a suggestion – scroll down]

Coaches can be enormously influential in the lives of children. If you ask a random group of adults to recall something of significance that happened when they were young, many will draw a blank. But ask about a sports memory from childhood and you’re likely to hear about a
game winning goal, or a bad foul, that, decades later, can still elicit emotion. The meaning that coaches or parents help young people derive from such moments can shape their lives.

But today’s youth coaches often struggle to provide sound, evidence-based, and age-appropriate guidance to players. Part of the problem is that less than 10 percent of the people who serve as volunteer coaches for youth sports receive any formal training. Most become coaches because their kid is on the team ― and they basically improvise.

For the whole article, see: http://opinionator.blogs.nytimes.com/2011/10/20/the-power-of-positive-coaching/

Now for a suggestion what to do in the situation outlined at the beginning of this blog (from Jim Thompson, founder of the Positive Coaching Alliance, see also http://opinionator.blogs.nytimes.com/2011/10/25/the-end-of-the-cold-war-coach/).

Response: “First, calm the parents down so someone doesn’t do something they will regret later. ‘Parents, I need you over here. Remember how we’ve said all season long that we want to be a team that honors the game? Well, this is the time to do that. I need you to remain silent about the official’s calls. Can you do that for me? Thank you. Now come on over while I talk with the team.’

“Now address the team (and the parents who will be listening): ‘Hey, Killer Bees, gather over here. I understand you are disappointed we didn’t win. So am I. But I’m proud of the way you played. Remember the ELM Tree (E for effort, L for learning , M for bouncing back from mistakes) we’ll be winners no matter what the score. You did that. You gave a great effort. You left everything on the field. You are continuing to learn and improve and we saw that today. Remember the last time we played this team? Do you see how much you improved? And I was proud of the way you flushed your mistakes and kept at it. And, by the way, is it okay for the official to make a mistake? Yes, that’s right. Officials are humans too and they make mistakes and that’s O.K. The bottom line is you outplayed that very strong team and I can’t ask for anything more from you. Now let’s go over there and congratulate them. Look them in the eye and say ‘Good game.’ Show your class. Let’s go!’”